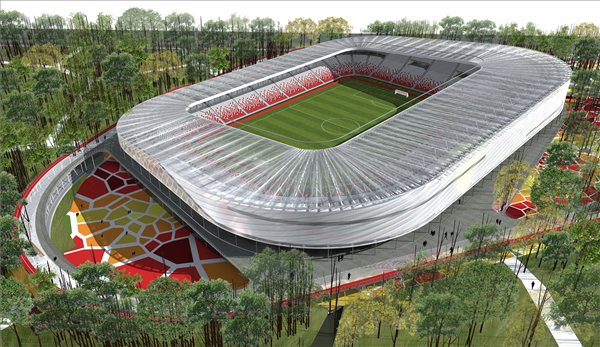 The conceptual plans of the new stadium to be built in Debrecen were presented on Thursday. The construction of the arena and the reconstruction of its environment are scheduled to begin this autumn and planned to end in the spring of 2014.

The plans were presented at a convention held on Thursday, 4 May. Péter Bordás designer highlighted the fact that with the construction of the Great Forest arena, Hungary will have its first 4th generation stadium which will provide the possibility to organize not only football matches but also other sport events.  Péter Bordás stressed that when building the stadium special care must be taken about the environment. The plans show an asymmetrical facility the eastern side of which are smaller than the western side functioning as the main tribune.

Mayor Kósa Lajos said the design was adapted to the new standards to be introduced by UEFA in 2015. The Great Forest stadium will be suitable for organizing any kind of football matches except for Champions League finals, world cup matches and European Championship finals. According to Lajos Kósa, previous investments like the Főnix Hall, the athletics stadium or the new swimming pool have already proved that it’s worth starting major developments and Debrecen can set an example for other larger cities and towns in this field.