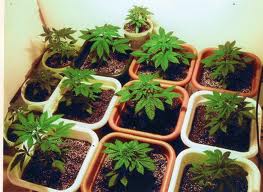 They planted the seeds on a farm then continued the cultivation of the plants in a flat in Debrecen.

On 24 May, 2011 policemen of the Hajdú-Bihar County Prefecture of Police caught and arrested a man who had established a special room for the cultivation of marijuana in a Debrecen flat. The man was caught in the flat while taking care of the plants. The authorities seized 250 mature plants from the plantation plus all the technical equipments and chemicals necessary for the cultivation of marijuana. The 35-year old man who was caught in the flat and his 36-year old brother, who had made the equipments and who was caught in his own home, were arrested.
The following day, 20 seedlings on a farm near Debrecen were also seized by the police. The brothers planted the seeds on this farm then brought the seedlings to the flat in Debrecen and continued their cultivation there. The market value of the seized drugs is 50-60 million HUF. The brothers were placed under pre-trial detention on Saturday. The Crime Department of the Hajdú-Bihar County Prefecture of Police initiated legal proceedings against the two brothers for felony drug abuse.