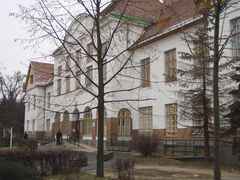 The dust can cause cough, breath problems for the sick, elderly people and children. The concentration of dust reached a high
concentration during the last couple of days.

However there was no need to order smog alert in the city. The experts advised elderly and young kids and those who suffer from respiratory illness to spend less time outdoors early morning and evening hours.

There are three Air pollution measuring stations in Debrecen. These instruments were set up to measure ozone, carbon monoxide and other polluting objects.
All the stations reported significantly increased dust over the past few days. On Friday all three Stations showed that the dust concentration exceeded the health threshold.

Dr Maria Szilasi Phd, director of the Pulmonary Clinic said that more people arriving with breathing problems. Who has chronic illnesses is more susceptible to air pollution, but the healthy body can be harmed by the increased amount of dust.

The experts says that the air quality indicators will be better and more favorable during the next few days. The forecast for Thursday is accelerating the movement of the air, so the air will be cleaner in Debrecen.